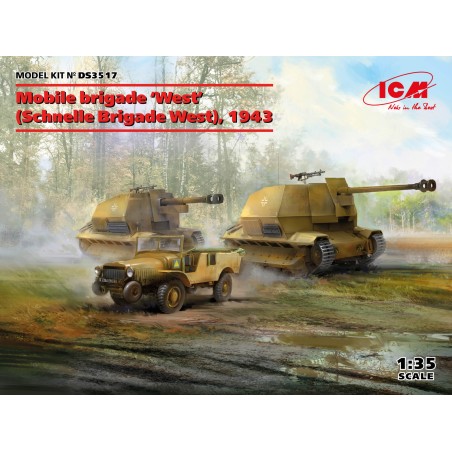 This brigade was created in the summer of 1943 as a mobile unit for operationalreinforcement of important areas of German defense in the West. It included unitsof motorized infantry, self-propelled guns, engineering and reconnaissance units.An interesting feature of the brigade was its heavy weapons, which in the vastmajority consisted of samples created on the basis of French trophy equipment.The Baukommando Becker design bureau led by military engineer Alfred Beckerwas engaged in the processing and modernization of this equipment. Among thesamples of such equipment were self-propelled guns (105-mm self-propelledhowitzers and 75-mm anti-tank tank destroyers), created on the basis of the FrenchFCM 36 tank captured by the Wehrmacht in 1940. The transformation of tanks intoself-propelled guns was carried out by equipping them with armored cockpits withinstalled in them with guns. The brigade also had French military vehicles, suchas the Laffly V15T all-terrain vehicle, which in the Wehrmacht had the designationLaffly (f) Typ V15T. The brigade was trained and trained in France, and later.