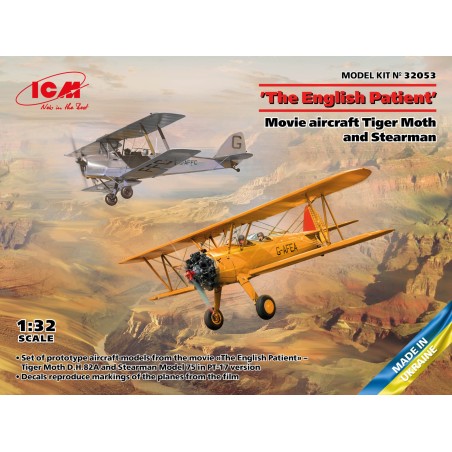 The Tiger Moth D.H.82A and Stearman (Boeing) Model 75 aircraft were single-engine
biplanes that had good flight performance combined with a relatively simple design.
Produced in large quantities (Tiger Moth D.H.82A – about 8,000 examples, Stearman
(Boeing) Model 75 – about 10,000), they were very popular, they could be seen in
different areas of the globe – from North America to the Far East. A number of Tiger
Moth D.H.82A and Stearman Model 75s continue to fly today, remaining in private
ownership or flying clubs. They also appeared in works of art and films, in particular,
they became prototypes of airplanes from the famous film “The English Patient”. The
scenes of flights against the background of the Sahara desert in North Africa were
remembered by many for their expressiveness, the Tiger Moth D.H.82A and the Stearman
Model 75 perfectly coped with their role. The multi-award winning film allows you to
enjoy the scenes with these simple and perfect planes.