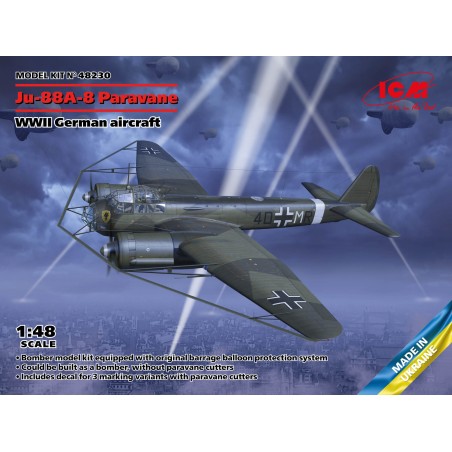 During the WWII balloons with steel cables were used in the air defense system of Great
Britain to protect against German air raids. Such barriers prevented the free passage of
aircraft and were dangerous for Luftwaffe pilots. To combat such barriers, German deve-
loped special steel cutters for their aircraft, which were also called paravanes – by analogy
with devices for protection against sea mines. Some of the Ju-88 aircraft of the A4 and A5 modifications were converted to use such paravanes and received the markings A8 and A6, respectively. The paravanes were massive steel structures in the form of a large frame, which was mounted in front of the aircraft and had the purpose of diverting the steel cables to the ends of the wing, where the cutters for cutting the cable were located. And although the facts of the combat use of aircraft with such devices took place, these paravanes did not become widespread.